What Causes Bad Odors in a Home? 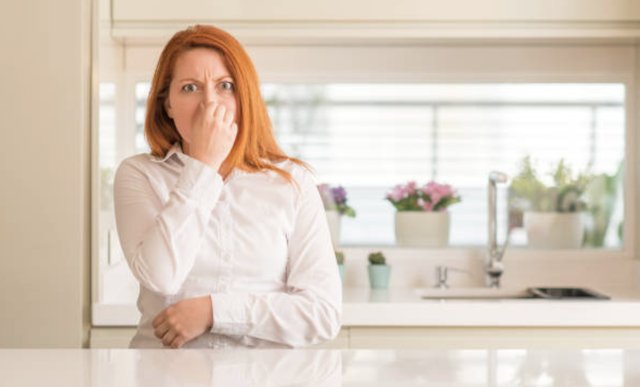 A number of things can cause bad smells in your home, from chemicals to pet odors to cooking smells.

Chances are, you don’t notice these odors because you have gotten used to them. But after a vacation or extended absence, you may be able to pick up on them a little easier. And then the process of getting rid of the odors begins.

You can try sprays, wall plugs, candles and other fragrances, but until you get to the root of the problem and get rid of what’s causing the smell, you are just going to be masking the odors. They’ll still be there, reoccurring when the perfumes are gone.

Read on to find out some of the most common household odors and the only way to get rid of them for good.

Common Causes for Odors in a Home

Your home is a never ending loop of new smells, some good and some not so good. Figuring out where the new odor is coming from is one challenge. Getting rid of it is another.

Every unique smell has a specific way to neutralize it. As we reveal the most common home odors, we will also uncover the solution for each.

Sewer odors can include the kitchen sink, dishwasher, or bathrooms – anywhere you have a water source. You may smell rotten eggs when you have a sewer issue.

Smells often originate from the U-shaped pipe under sinks or from unused toilets. By simply running water in these fixtures once a week, you can eliminate the odors coming from them.

Smoke from cigarettes and cooking don’t go away quickly. Cigarette smoke and odors from cooking strong smelling foods like bacon, curry and fish can remain in your home for days. And while you may be used to these smells and not even notice them after a while, guests surely will.

Cigarettes are full of carcinogens. Once the smoke is extinguished, the chemicals that cause odors stay behind on your furniture, walls, and carpet. To fully remove these smells, it requires a deep home cleaning. And no more smoking in the house!

Cooking odors result from too much smoke or very aromatic foods and herbs. A good exhaust fan that is cleaned regularly will filter out the majority of these odors so you don’t have to live with yesterday’s dinner for days to come.

Mold has a distinct musty odor, so it’s pretty easy to identify. You can mask the smell of mold and mildew, but it won’t go away until the mold itself is removed.

Mold is much more than a nuisance, though. Some people are very allergic to mold and can suffer a severe reaction after inhaling mold spores. Therefore, getting rid of mold is more of a health concern than it is a home odor issue.

Many homes use natural gas for heating their homes and cooking. It is odorless and colorless, and it is an affordable alternative to full electricity for many homeowners.

So if it has no smell, how can a gas leak cause odors?

Gas can cause a fire or explosion, so it’s important to be able to detect gas leak. For this reason, natural gas has a sulfuric chemical added to it that smells like rotten eggs. It’s very noticeable and very unpleasant, so you can’t ignore it and want to take care of it quickly.

If you notice this smell in your home, make sure all your pilot lights and burner valves to make sure they are off, then contact your gas company for a refill or to determine the source of the leak.

It’s impossible to eliminate trash smells. You can only hope to contain them. Every time you open the trash can or the cabinet where your can is stored, you probably get a whiff of unpleasant smells.

To reduce the potency of garbage odors, use the old trick of sprinkling baking soda in your trash can or trash bag. Clean it out each time you change the bag, and clean your trash can often with bleach.

You can prevent really stinky garbage odors by skipping the trash can altogether. Go ahead and take trash to your outdoor receptacle if you know it will cause strong odors in the house.

We love our pets, but they bring in all sorts of questionable odors that we’d rather not have in our homes. If your dog goes outside frequently, they probably come back in smelling a little musty. When they lie on the carpet, their bedding, or the couch, they can transfer those smells.

Wash your pets or take them to the groomer regularly to minimize odors, and clean the areas where they rest with the appropriate cleaner. And, of course, clean up accidents right away.

Rodents and other small animals take refuge wherever they can, including your home. When an animal dies within your home, you’ll start smelling the offensive odor of decay. It will eventually go away, but it’s really disgusting until it does.

As much as you don’t want to, you need to locate the animal and remove it. Look behind appliances and in lightly traveled areas of your home, like the attic or basement.

The best way to remove smells from your home is to hire a professional company that specializes in this type of service.

A+ Restoration & Cleaning can bring in cleaning equipment, air purifiers, and anything else necessary to completely remove the offensive odor. We can often identify the cause of the smell in a matter of minutes because we deal with this sort of thing all the time.

Most importantly, we can make sure the smell stays gone by eliminating it at the source.

In many of these cases – mold, sewer issues, and rodents – you may need a team that specializes in that particular type of removal or repair.